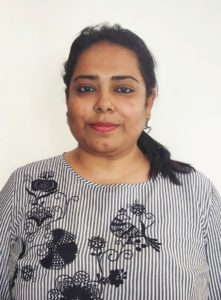 Hansika Singh has over 7 years of work experience spanning consulting with brands and non-profits, research and advocacy, and entrepreneurship. She holds a Master’s In Development from Azim Premji University, Bangalore and a Bachelor in Fashion Technology from National Institute of Fashion Technology, New Delhi.

Hansika started her career with the Swedish brand H&M, working in India and Sri Lanka for three years. In 2013 she moved to the non-profit sector with Make a Difference (MAD). She also co-founded a not-for-profit initiative on Sustainable Consumption called Ecofolk which was active between 2014 and 2017. The initiative reached over 500 school-children and 100 adults across 3 cities.

Before SoStakes, Hansika was consulting with non-profits. She independently led research and documentation work on two research projects in Bangalore, funded by Shakti Sustainable Energy Foundation and The Amplify Change Fund. In addition to this she is a part of a group of researchers working on Urban Air Pollution in India, and a member of Bangalore Bus Prayanikara Vedike, an advocacy group working for bus-commuters rights in Bangalore.

In 2017, FRIDA – the young feminist fund, recognized Hansika, as a young feminist working for climate justice and her experiences were covered in their first zine which was presented in the 13th Conference of Youth (COY 13) in Bonn, Germany.