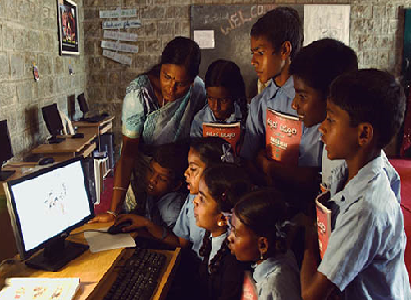 What do we mean by a digitally literate person?

A digitally literate person should be able to operate computers and digital access devices like tablets, smartphones etc.), send and receive emails, browse the internet, access government services, search for information, undertake cashless transactions, etc., and hence use IT to actively participate in the process of nation building.

National Digital Literacy Mission (‘NDLM’) has been initiated with the vision to empower at least one person per household with crucial digital literacy skills, by 2020. To make a person IT literate, NDLM is offering a 40-hour course that includes hands-on training on operating digital devices such as mobile devices, tablets and desktops with internet browsing and search for basic information, online chat and e-mail communication.

The Pradhan Mantri Gramin Digital Saksharta Abhiyan (PMGDISHA) was initiated under the Digital India Program. The Cabinet approved an outlay of Rs 2,351.38 crore[1]. The scheme will be implemented under the overall supervision of the Ministry of Electronics and IT in active collaboration with States and Union Territories through their designated State Implementing Agencies, District e-Governance Society (DeGS), etc. The government is also encouraging village level entrepreneurs (VLEs) to impart digital programs through common service centers (CSCs) in village blocks. The Government is also working with content providers to include local languages to make the program citizen friendly with special focus on mobility devices which in line with the Government’s strategic shift to m-Governance for various citizen-centric services.

Many corporates are also coming together to ensure that the dream of a digital literate India becomes reality. The government has partnered with the Nasscom Foundation which is driving the digital literacy initiative with CSR (corporate social responsibility) funds from multinationals such as Google, Microsoft, and Intel. Corporates have come up with a collaborative and innovative initiative under the CSR banner to impart digital literacy to the underprivileged and help in driving employment-led software skills. “Code unnati” is one such program led by a consortium of corporates – SAP India, ITC and Larsen and Toubro Charitable Trust, on similar lines as the central government’s Pradhan Mantri Gramin Digital Saksharta Abhiyaan (PMGDSA). The development of curriculum, pedagogy and the technological infrastructure will be provided by SAP, the delivery mechanisms and teachers will be provided by ITC and L& T will handle the outreach.

While all these initiatives are being handled at a country level, is the Government doing enough for school going children? As per demographics, the largest segment of population which is between age group of 6 to 23 yrs is 46%[2]. Of this, children covered under the RTE i.e ages between 6 to 14 yrs are 17.11 % with 95% enrolled in Govt Schools.

India allocates Rs. 79,685 Cr towards Education, 3.7%% of GDP, whilst most of the advanced nations allocate around 6% of GDP. There is an e-learning budget allocated for higher education of Rs. 497 Cr for 2017-18. However the budget allocation for primary and secondary education is negligent. This is alarming. We need to ensure larger budget allocation for digital literacy in Government schools.

Enthusiasts have heralded that digital technology is a powerful tool for breaking down barriers. Technology can give a child living on the streets access to the same information as the most affluent child. Advanced nations and pioneers in the area of digital literacy such as Norway and Singapore have built elements of digital literacy into the foundation of their school curricula with high investments in ICT focussed education.

It is imperative that that digital literacy should be built into the curriculum of schools, particularly in Government run schools. This calls for an increase in the budget allocation. Here is a gap that exists and Corporates can collaborate with NGO’s in this area and ensure digital literacy is imparted in schools to make sure that our future citizens are digitally enabled to face the future.