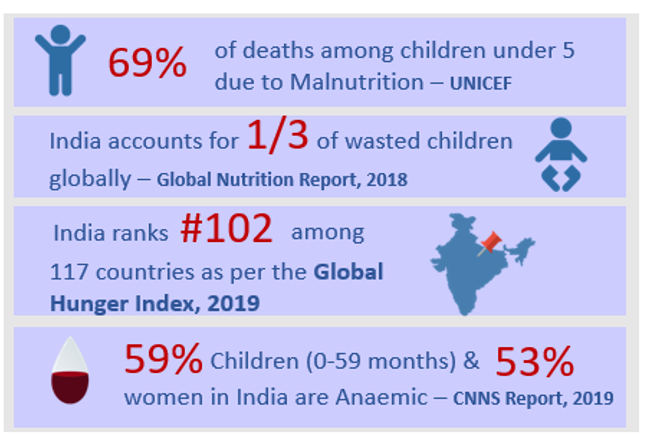 The topic of Malnutrition has gathered momentum over the last year following the stark figures presented by research findings such as the Comprehensive National Nutrition Survey Report (CNNS) 2016-2018, the Global Hunger Index Report 2019, a report on the state of the world’s children by UNICEF and others.  So we decided to take a closer look at the situation. How grave is the problem? What does it mean to our economy? And is there something each of us can do to improve this situation?

Maternal mortality and infant mortality are the primary focus areas of the Sustainable Development Goals (SDG) on health, but the success of these indicators is closely linked to another equally important issue which is not so visible i.e. malnutrition.

Malnutrition refers to the deficiencies, excesses or imbalances in a person’s intake of energy and/or nutrients[1]. The condition encompasses both undernutrition and overnutrition (obesity) and is calculated across indices of height-for-age; weight-for-height and weight-for-age. Malnourished children are identified as stunted (low-height-for age); wasted (low-weight-for-height), and under or overweight for age. Stunting can be attributed to ‘chronic undernutrition over a long period’ while wasting is the result of inadequate food intake and/or recent illness[2]. Along with inadequate diet, poor sanitation and hygiene, lack of clean drinking water, low literacy levels of parents’ are contributing factors. Malnourished children lack immunity, making them susceptible to disease and are at a higher risk of poor mental development, and mortality. Stunting in early life can have long-term effects on health, physical and cognitive development restricting children from reaching their fullest potential thereby placing an immense human and economic toll at the individual, household, community and national level.

The CNNS Report based on sample data for 38,060 preschoolers aged 0–5 years from 30 states in India revealed some alarming facts on the nutritional status of Indian children. 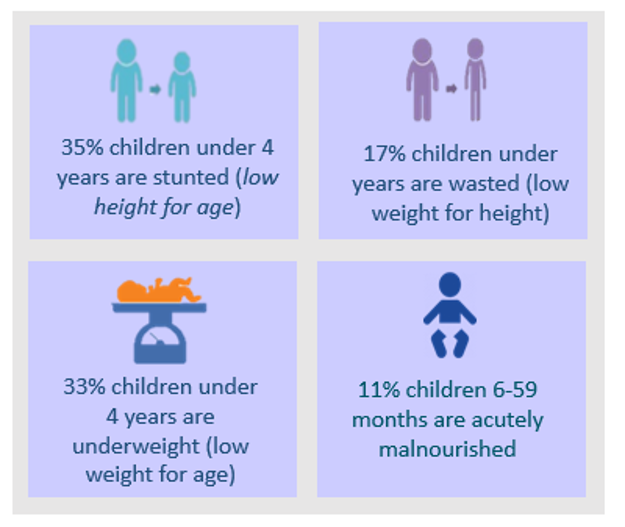 Malnutrition has also contributed to the severe state of anaemia in India. Anaemia, related primarily to iron deficiency and other nutritional deficiencies is a severe public health problem among women, adolescent girls and young children. According to the National Family Health Survey (NFHS) – 4 Report, anaemia among children (6-59 months) although down from 70% to 59% is still very high, especially among rural children. 53% women are anaemic and not much progress has been made in the last ten years Anaemia and micronutrient deficiencies can lead to impaired cognitive development, poor physical growth, increased morbidity and psychomotor development.

Poor nutrition, leading to iron deficiency, is the principal underlying factor in more than 60% of all anaemia cases.   India contributes to almost one quarter of the anaemia cases in the world as calculated by the Global Burden of Disease in 2016. 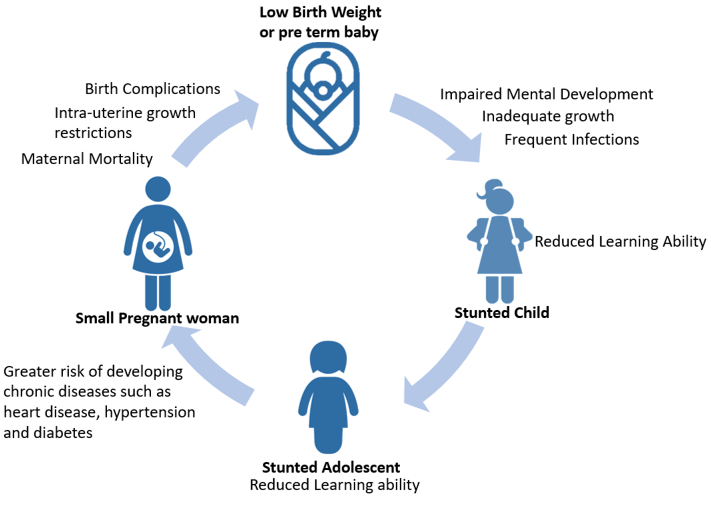 Image source: Strengthening Integration of Nutrition…commissioned by the EC (May,2018)

The CNNS report puts forward malnutrition as one of the principal causes limiting India’s global economic potential that limits children and adolescents’ education and employment potential and creating a cycle of unending poverty. Cost-Benefit Analysis of Nutrition Interventions revealed return on investments is approx. ~ 18:1 per child.1 cm increase in height was associated with a 4% increase in wages for men and a 6% increase in wages for women. Therefore investing in nutrition for children and young people is a cornerstone investment. – CNNS Report, 2016-2018.

To break the intergenerational transfer of poverty, the issue of malnutrition needs urgent attention.

The Indian Government has recognised the challenge of malnutrition and launched the Poshan Abhiyan (National Nutrition Mission) in 2018. The Government seeks to eradicate malnutrition by 2030 and has set up a national council under the aegis of Niti Aayog to give momentum to this priority.

The mission aims to improve the nutritional outcomes for children, pregnant women and lactating mothers. It addresses the problem on a mission mode and through a convergence of multiple government ministries like the Ministry of Women and Child Development, Ministry of Health and Family Welfare, Ministry of Drinking Water and Sanitation. It is an ambitious program which employs multi-prong strategies like stressing on the first 1,000 days of a baby’s life, diarrhoea management, anaemia prevention, nutritious food, and hygiene, sanitation and safe drinking water to alleviate malnutrition.

In the last 5 years since CSR was introduced, contribution to the health sector has been negligible. Corporates prefer and are more comfortable to spend on education, sanitation and hygiene since the outcomes for these interventions are more measurable than health /nutrition. However, some corporates, such as HCL, and Tata Motors have recognised malnutrition as a key development need. HCL has funded Child In Need Institute (CINI) in West Bengal which aims to improve maternal and child nutrition in grass root areas by initiating supplementary nutrition and intensive family counselling. CINI tracks the entire pregnancy journey and provides support on the various challenges faced through the journey.

India is aspiring to become a $5- Trillion economy in the next 5 years. We need concerted efforts by all stakeholders (Corporate India through their CSR programs) to win the battle against malnutrition and to make children’s nutrition a priority along with education, water and sanitation. Investing in child nutrition is key to human capital formation because it is fundamental to children’s growth, cognitive development, school performance and future productivity.