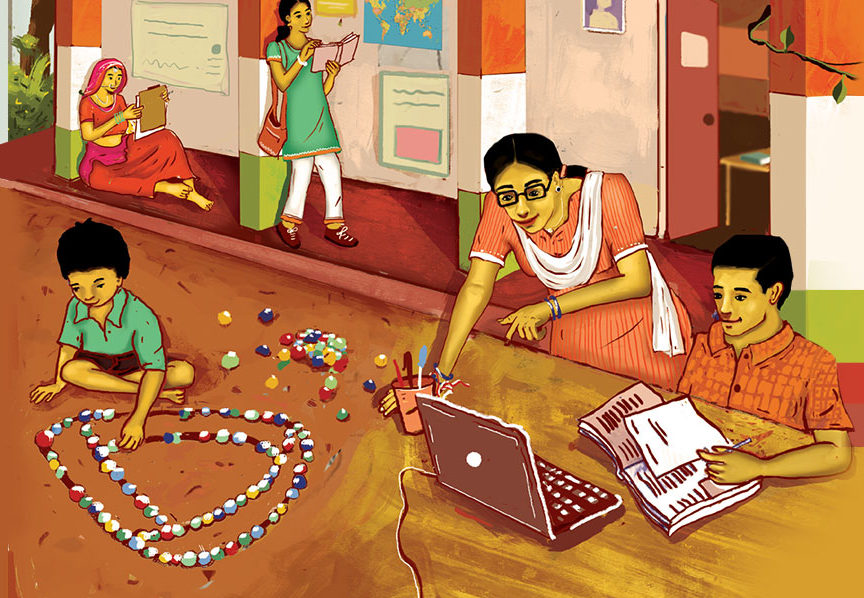 The draft education policy of 2019, is a much-awaited move, made after the last education policy of 1986 (modified in 1992 and 2005). The policy envisions a robust public education system for India, and enlists institutional, curricular and pedagogical restructuring in the coming years. The vision it represents is a significant departure from the way we have envisioned schooling, higher education and learning in general, for the country’s growing young population. The policy is significantly forward looking with a recognition that the young learners of this generation belong to the technology-rich environments and their learning environments need to reflect the same.  They will use technologies that haven’t been invented so far and will enter jobs that don’t exist at present. The policy thrusts upon curriculum and pedagogy reforms across all stages to move the education system towards real understanding and learning how to learn – and away from the culture of rote learning present today. The goal is to create holistic and complete individuals equipped with key 21’st century skills.

Ministry of Human Resource Development, Government of India is seeking inputs and suggestions on the Draft National Education Policy (NEP) 2019 from citizens, till 31st July 2019. Below are some of the suggestions we submitted for the draft.

Data suggests that all Indian States are at different levels of foundational literacy and numeracy targets.  Certain states are ranging from 80 to 95% of achievement of targets while the others record poor scores. This leads to an inconsistent learning pattern in the national education picture. According to data from Niti Aayog, states which are score below 30 for indicators like learning outcomes in language, math science and social sciences (< class 5) are:  Goa (28), Meghalaya (14); Punjab (24), Chhattisgarh (38) Delhi (25). Similarly learning outcomes in language, math science and social science (< class 8) sees states like J&K (16); Punjab (22) Tamil Nadu (26); Delhi (22). We feel that the policy would remain incomplete without laying down a direction as to how states, which are falling below a defined, score mark should be dealt with.  A comprehensive direction on additional steps to be taken by States or setting up a task force that can articulate a strategy is recommended. There has to be a greater focus on states scoring low scores just like “the 119 Aspirational districts program”.  On the subject of learning outcomes, we still don’t see a defined standard on what is age appropriate learning outcome that is expected. A standardization of this expectation is much needed, which would enable all states to have an integrated approach. This approach would also support students who have discontinued education and would like to re-enter and continue education.  It is found that children of migratory population remain out of school, as the transition of schooling between states is not easy due to language barriers.

The draft sees compulsory liberal education as a means to increase the gross enrollment ratio in higher education from 25.8 percent at present to 50 percent by 2030. And the draft also suggests bringing down the total number of higher educational institution from around 50,000 in present to a maximum of 12,300 in the coming years (Table A1.7, Page 419). The arithmetic of doubling student intake while reducing the number of institutions to a quarter of its current number, is not backed by a sound institutional strategy or established policy wisdom in this context. It would be helpful to have a clear direction on this from the policy.

The Chapter 19 of the policy document deals with including Information and Communications Technology (ICT) in Education. The policy talks about integrating digital literacy as a part of the curriculum. However, it is silent on what would be the appropriate age to introduce ICT/digital learning related education. Would it be at the Early Childhood Care and Education (Foundational stage), Pre-Primary School (Grades 1, 2) or 3 years of the Preparatory (Latter Primary) (Grades3, 4,5) ? It would be helpful if a direction is provided based on experiences drawn from the rest of the world.

RSA is the apex body envisioned as the custodian of the vision of education in India headed by the Prime Minister. The introduction of RSA is a step towards rethinking of education governance in India. The proposal to make the Prime Minister the head of RSA, is a move that may bring more implementation power to the vision of the policy. The flip side is that it might undermine the autonomy of such a commission to debate freely on various academic ideas and can be seen as a move towards centralisation at the cost of inclusiveness. There is also a need to re-look the governance structure of RSA to ensure representation from each state.