The CSR rule gives guidance as to how companies should utilize the 2% contribution. The rules state that “the Company should give preference to the local area and areas around where it operates for spending the earmarked CSR money”.

While this geographical mandate is a good guidance to companies – it is important to test this for any unintended implications. 87% of ET 250 companies have their headquarters in 7 states – Maharastra, New Delhi, Karnataka, Tamilnadu, Haryana, West Bengal and Gujarat. And these 7 states account for 40% of the total spend on CSR. 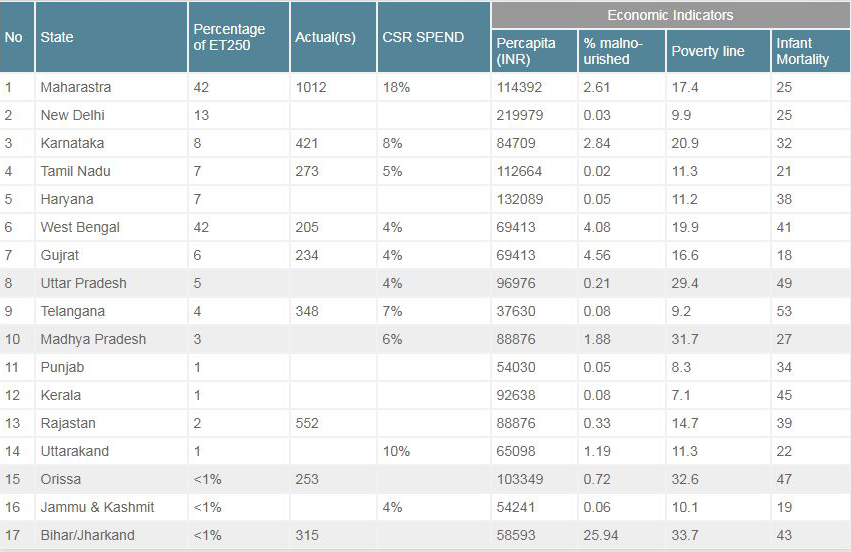 The question arises – Will States with a greater need be deprived of the new source of CSR Funds?

U.P, M.P, Orissa and Bihar are states with relatively low per capita income and higher percentage below the poverty line. Some of India’s serious problems including health and developmental issues are more prevalent in these States.These states also happen to have lower representation of companies and hence will have to suffer this inequities. Some of the other states which are likely to see very little of CSR funds are Meghalaya, Nagaland, Manipur, Tripura and Mizoram.

Would it make more sense if Corporate Inc. spent their CSR money in the less-developed states rather than go in for projects closer to their offices? Further, even within a state the developmental needs are more in the rural areas. How do these areas access the CSR funds? Will the Boards of companies move away from the stereotypes of working on projects closer to their office to enable employee engagement processes or look at projects which are in the interiors where the need is far higher?

Corporate India needs to decide whether they want to comply with the letter of the mandate or do some soul searching and assess the spirit behind the CSR laws, thereby expanding their wings to go beyond their comfort zone in order to explore and set a benchmark for “doing good”.

It is worthwhile mentioning here that the (CSR) rule makers will do well if they clarify that “corporate social responsibility spending outside a company’s operational geographical areas is acceptable and will not result in any discriminatory action”.